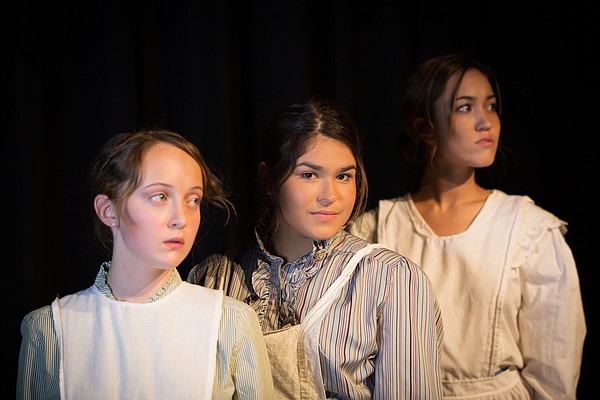 Who knew that radioactive chemicals are dangerous? Well, the people of 1926 were surely not aware of this fact as seen in South County High School's production of "Radium Girls," which answers the question of what occurred to the people who simply thought radium to be a glow-in-the-dark substance.

Based on a true story, "Radium Girls" was written by D.W. Gregory in 2000 and follows the lives of young female factory workers tasked with painting watch faces with a luminous radium substance. When the workers develop ailments as a result of their exposure to the radioactive element, their conditions worsen and they have no choice but to challenge the company that is gradually killing them.

Aadith Iyer commanded the stage as Arthur Roeder with his depiction of the conflicting characteristics of compassion and greed. Iyer portrayed the human side of a villain and the strife that comes with being the head of a corrupt company, both of which were accentuated by Iyer's uptight posture, clear articulation, and overall authoritative presence.

Mincy Barbosa played Grace Fryer and portrayed her character's declining health with mannerisms such as trembling hands and a pained hobble across the stage. Barbosa's ability was highlighted through shy yet loving glances, illustrated in the relationship between Grace and her husband Tom (Zach Patel). Together, Barbosa and Patel's endearing partnership provided comedic relief even through the desolation of the show.

Irene Rudolph (Aren Iverson), Kathryn Schaub (Shaylen Estrella), and Grace Fryer amplified the show's spirit of female empowerment through their supportive yet playful nature towards one another. Blending her initial feistiness with the sudden emotion required for her performance, Iverson took on her role with ease as she played off Estrella and Barbosa, providing a charming dynamic. They exhibited consistency with their movements, particularly with a commitment to licking paintbrushes and the clockwork choreography as displayed in the nightmare scene.

The entire ensemble allowed for the cohesive flow of the show as they accurately identified the tone shifts and accented the pivotal moments. The pair of reporters (Ella Nguyen and Kevon Thompson) added to the collective energy with their lively spirit, which was both engaging and fit the tone of the time period.

The technical elements of the production united together in order to meet the expectations of the show. The lighting, headed by Sarah Khalil, back lit the sets, alternating among a scenic sunset and a neon green shine. The green illumination allowed for a parallel between the beginning and end as silhouettes of the factory workers were presented, providing an ominous stage picture. Lighting enhanced transitions replacing the standard blackout with a fade to a green hue. The music, written by students Julien Monette and Ryan Bonanno, accompanied transitions as it subtly matched the emotion of the scenes that it surrounded. The show demanded intricate and vividly grotesque makeup to represent the girls' declining health, and the makeup crew accomplished this with peeling skin and sores that looked painful to the touch. The time period of the show was recognized within the production as the hair of the factory workers was tied up to reflect the factory regulations. Grace's hairstyle was altered throughout the production to symbolize the deterioration of her health and conformity to society.

The luminescence of radium may glow so vividly in the dark, but not as distinctly as South County High School's production of "Radium Girls" where each actor shone brighter than the radioactive substance.